How To Keep Cats Away From Chickens

It’s understandable to believe do cats eat chickens as cats enjoy hunting birds. House cats are more likely to pursue creatures that do not pose a threat. If stray cats are provoked, they will go for tiny birds, rats, mice, and occasionally other pets or domesticated animals such as cats and dogs.

Cats will also be less likely to attack adult chickens because of this. If a regular cat fought a chicken or rooster, the cat would most likely win, but it would also most likely be injured.

An aggressive rooster may fight a cat, but this is unlikely. Usually, you’d only see a rabid or malnourished cat attack a chicken, but this is an uncommon occurrence. You should pay more care if you’re raising a brood of chicks. As a result, a cat’s first prey is baby chickens. 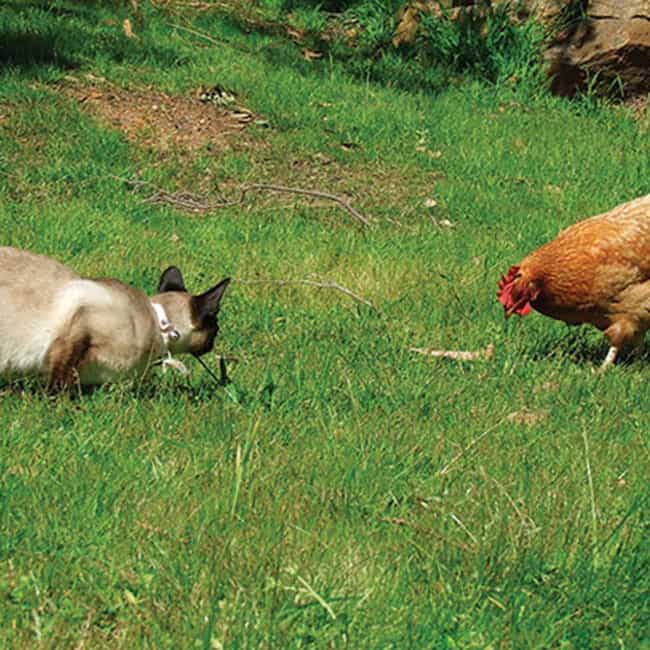 In our guide, you can find many ways to protect chickens from outside threats and keep predators away that could be out to kill chickens or steal the eggs.

By the end, it doesn’t matter if it is your baby chicks and a stray cat; you’ll know how to protect chickens from cats. (Read Do Deer Eat Potatoes)

How Do I Protect My Chickens From My Cat?

It’s safer to rear baby chickens in a secure environment. For example, you may find cats kill chickens in a barn, basement, shed, or back porch when they are young.

For a variety of reasons, having a closed room is essential.

To begin with, chicks aren’t particularly good at self-regulating their body temperature. So, unless the temperature outside maintains above 60 degrees at night, keeping them indoors will be beneficial.

Most owners opt to set up a pen for their baby chicks that include at least one heat lamp so that they can warm up when they’re cold.

To keep your baby chickens safe from predators, raise them indoors. This problem alters to some extent when you’re raising baby chicks in the winter.

While some species are less active during the winter, non-hibernating creatures such as stray cats, rats, and other get particularly hungry. This may lead them to enter human areas when they otherwise would not.

Raising baby chickens in an enclosed environment accessible only through a door would be a safe way.

Try to seal any larger openings that a possum or raccoon might be able to slip through, and set up rat traps for added protection.

While a mouse could kill a baby chicken, it is more likely to eat the chicken food. Mice aren’t usually a concern for chicken keepers in this sense.

Feral cats are likely to be deterred by any deterrent that works against wildlife.

While cats as pets may be a problem, you may keep your baby chickens safe by temporarily putting them in an enclosed place where other animals cannot access them.

Wild birds are usually kept outside, which makes them exposed to predators who wouldn’t bother hens and roosters if they were kept inside a coup or could access a hen’s loft.

Raccoons, possums, and coyotes should all be avoided at all costs. Coyotes may or may not be a problem in your area, depending on where you live. (Learn How To Get Rid Of Patio Ants)

Can Chickens Defend Themselves Against Cats?

Chickens don’t fight house cats, as in most situations, these pose little threat unless the cats see small chicks as small birds and take the opportunity.

Fully grown chickens can act as a warning system toward other animals, feral cats, or potential predators.

Here you can find the best ways to keep cats and chickens, and other predators away from your backyard chickens.

An electric fence is a frequent predator deterrent. This can deter chickens from fleeing and predators from approaching.

Coyote attacks may usually be avoided with a barrier like this. However, coyotes are more likely to attack at night, so put your chickens in an enclosed coop after sunset to prevent them from injuring them.

Such fences can keep large animals out, but snakes can easily slip through and catch one of your chicken babies.

Another method is to use live traps, but many chicken owners prefer to wait until they see a predator attacking a full-grown chicken in their flock before they go with this option.

Live traps are frequently used with bait, and you can find many animals are attracted to certain foods. The problem here is if you put fish or cat food in them, you could occasionally catch your house cats rather than wild cats.

For animals such as squirrels, you can use the chicken feed at the bait, but you may find field mice are in and out through a small opening without springing the trap.

Live traps can be helpful to catch a raccoon that’s after eggs, but you need to be careful as your transport the animals a few miles from your home so it won’t come back you your home or your neighbor’s.

Some chicken owners have problems with raptors attacking their flock. Because a fence won’t stop flying predators, they can quickly swoop and grab baby chicks without much effort.

Scarecrows, fake owls, and flashing lights are some methods used, as well as hanging old CDs along the chicken coup perimeter that flash in the light.

Will Stray Cats Eat My Chickens?

Domestic cats may not attack your flock and are more concerned with rodents such as mice or rats, yet feral cats don’t fall under the same mentality.

Here are other ways you can protect your flock birds from such threats.

Get a Good Rooster

Check your city’s ordinances to be sure you can have roosters where you live. Living in the country is likely fine, yet urban settings not so much.

A noisy rooster can annoy your neighbors, so asking them first is wise.

Roosters aren’t necessary for egg production, but they protect your flock and can attack any animal approaching your chickens. (Learn How To Keep Birds From Nesting On Your Porch)

Your rooster will herd hens together in the face of predators, yet mice and rats are never seen as much threat around the coop.

Use a Farm Dog

A farm dog will guard chicks against predators in the same way your dog protects your house from the delivery guy.

If you decide to use a dog to defend your chickens and chicks, you need to ensure they are trained, or they could cause more issues, especially if you have a house cat out hunting mice.

To ensure your chickens are secure, you may need proper fencing rather than just electric fencing.

Here there are two ways to go about this. 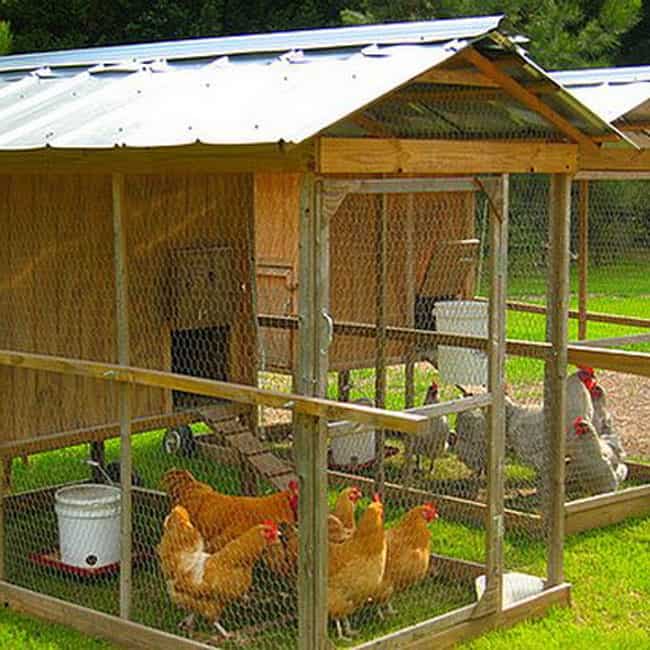 Depending on the number of chickens you have, purchasing or building a chicken run can cost. A chicken run for a handful of chickens can cost a couple of hundred dollars. For more chickens, then you’ll need to invest in something larger.

Concerns are how much protection they offer against the weather, where you can sit it in your yard, and whether it leaves your chickens as easy prey?

You need to think about if your brooder will connect to your regular coop. Also, adding a heat lamp for young chicks will be vital in the early days. Because of this, where to place it in your yard will need access to electricity.

While a cat can’t get close to the lamp and see your chicks as prey, you could find mice taking advantage of the warmth in cold weather.

proper chicken wire or welded hardware cloth can help you make a secure area much cheaper than the above option.

While a regular fence can let animals jump over, if you have netting across the top, you stop these and birds from entering.

When you have chickens enclosed in such areas, they’re more free-range, and all you need is a chicken loft or chicken coop to close them up for the night.

Most cat types can jump 5 feet quickly, so you’ll need to ensure your fence is higher or the netting across the top is secure.

Get a 6-foot fence and bury at least 6 inches of it into the ground to protect your chickens and chicks from other predators as well as cats.

This will deter other predators and dogs that might try to dig under the fence.

One thing overlooked is that while keeping cats and keeping predators out, you keep your chickens in.

Chickens can’t fly like other birds, yet they can flap and jump to heights of 6 feet or more.

Trees around your coop can be helpful in a variety of ways. The first is to protect chickens from the sun and predators.

The trees can also supply the hens if they are grown within the chicken enclosure.

Growing fruit or nut trees in the poultry enclosure provide extra food for the hens to peck on.

Because a cat and other predators can climb, ensure trees are inside your chicken area and not outside.

It could be easy for the neighbors’ cat to climb a tree in their backyard and access your chicken area in your yard. 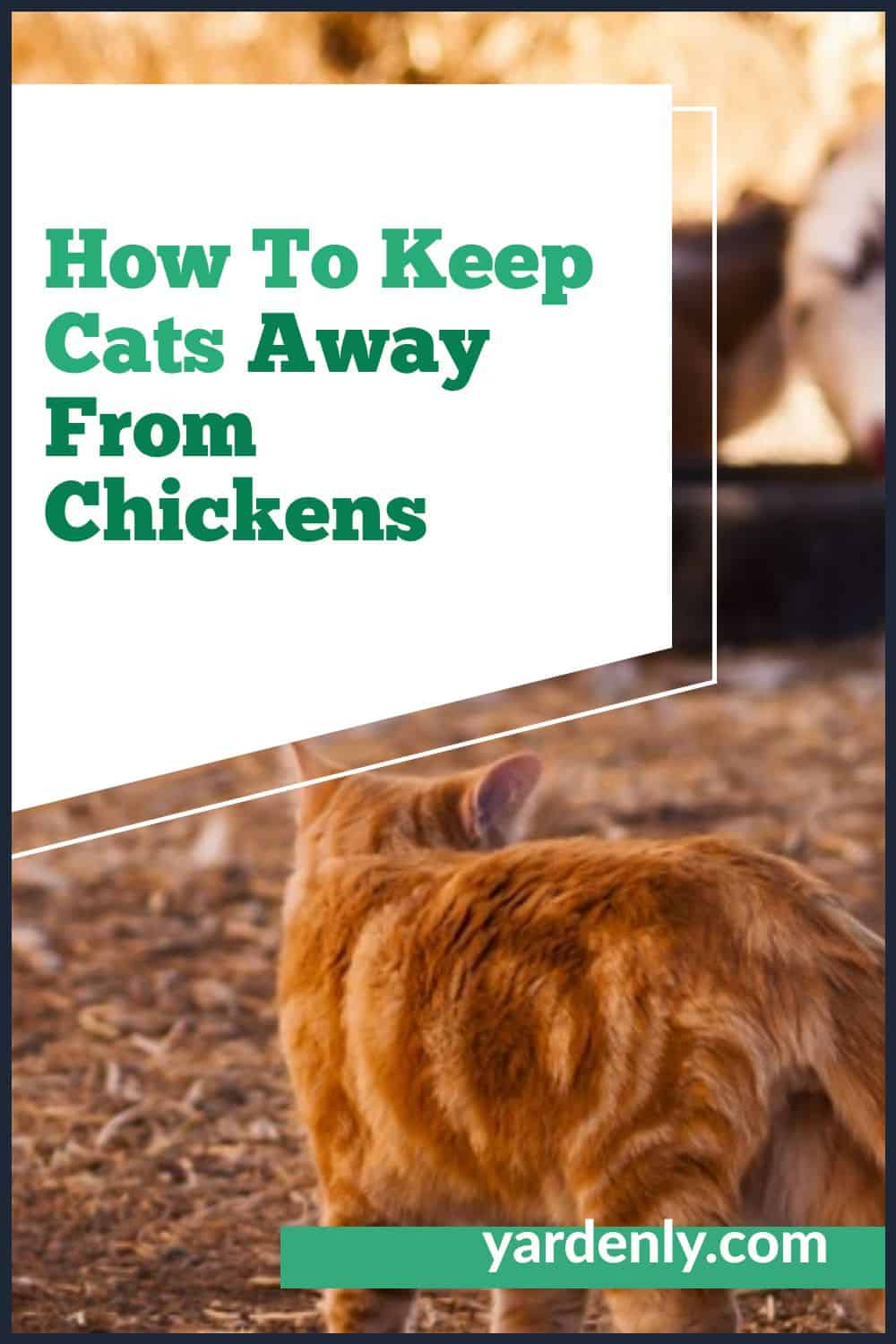