How To Reinforce A Wood Beam Using Steel

Mainly in residential structural engineering projects, wood beams are a typical structural element as opposed to other building materials such as steel beams. When supporting floors and ceilings, a wooden beam will be used as a joist; the contractors span between two support points, creating reinforcement from one location to another and supporting the floor above.

You can find many common wooden beams of varying sizes—all coming with established and recognized strengths and deflection characteristics. There is more to this than cost when deciding the size of the beam to be used. Smaller beams cost less, and you’ll need more to accomplish the same load capacity. However, there may come a time when the shear resistance of the wood beams lessens, and they can’t support the entire weight above.

Once a wood beam loses its strength, you’ll end up reinforcing wood beam structures as beam reinforcement is possible, whereas replacing them is almost impossible. In our guide, you can learn more about wood reinforcement, which isn’t as straightforward as you imagine. By the end, you’ll better understand metal reinforcement for wood, even if you need a professional to carry out the task. (Read Drywall Vs Plaster How To Tell) 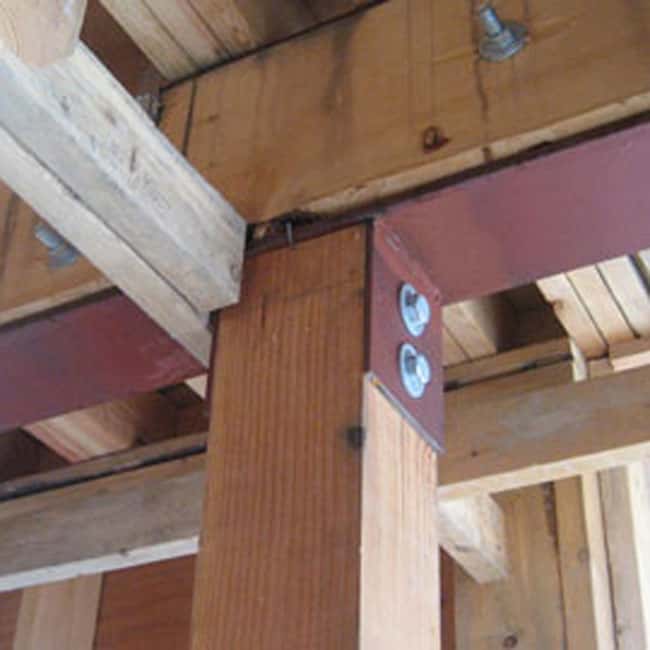 It is possible that we will not be reinforcing wood beams with more timber alone. Metals, steel strips, and plates have reinforced and strengthened structural timber for over 200 years.

Using steel and epoxy on timber members helps conservation and avoids the need for demolition. Because many timber members in sound condition are destroyed, reinforcing wood beams with any method helps salvage as much of the original material as possible.

Reinforcing a beam with flitch plates is a common way. The approach involves placing a steel plate between two parallel wooden beams, then bolt holes are drilled through, and the entire beam is bolted together.

Here, rotten timber is cut away from the wood beams and replaced with new timber that is butted against the old. To create a flitch beam, one steel plate is typically sandwiched between two timber beams, and the whole thing is then bolted together.

Beam supports need to use side angles bearing on the pad stone or wall plate to provide the steel plate and beam end with the required rigidity. The number, thickness, length, and bending stress of the flitch plate to be used in the repair should be determined with the help of a structural engineer.

Since steel is typically 30 times stronger than timber, the steel plate used in reinforcing wood beams bears most of the bending force. The flitch plate sandwich is constructed with timber beams on the outside to prevent the thin steel plate from buckling.

Extra fixings will be required to prevent the plates from buckling if they are outside the assembly, and the necessary drilling may weaken the beam. 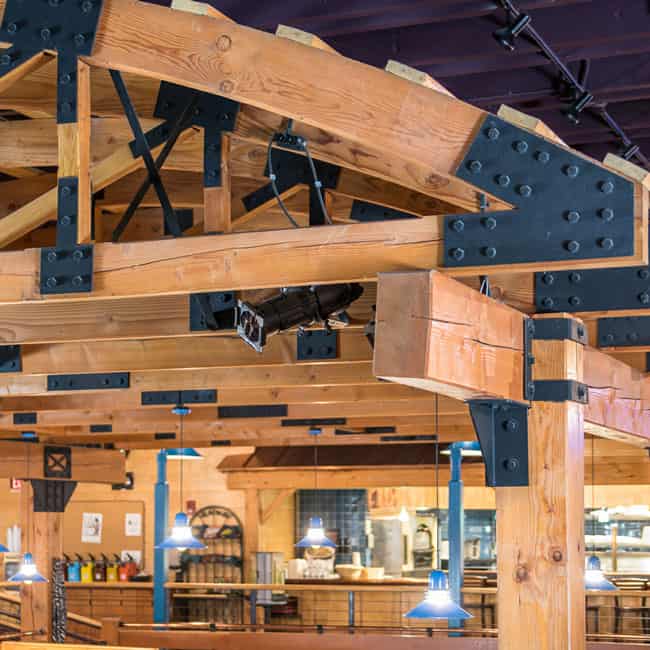 2. Use Of Side Plates

The side plates should be used when the damage is concealed. For example, the timber beam has steel plates bolted horizontally on both sides.

It’s not a good idea to attach side plates to uneven surfaces when reinforcing wood beams as the spaces behind them are prime territory for insects to breed and develop; thus, they can weaken the structure more. Side plates typically increase shear resistance, albeit position is less crucial in this case. (Learn How To Remove Wood Floor Glue)

Here, metal plates are bolted vertically to the bottom and top of the weakening timber beam. The timber serves as the web, while the steel plates represent the top and bottom flanges, creating an I section.

A stiff joint over a large area is needed where the plate is bolted to the beam to prevent the timber from splitting. To avoid the timber beam from becoming too weak, the bolt holes must be staggered in such timber constructions.

Slotted holes in the bolts must attach the plate to the joint, and the holes themselves must not be filled with glue or grout to allow for seasonal expansion and contraction of the timber construction. (Read Can You Use Joint Compound On Cement Board)

The International Residential Code is the basis for today’s normative home building codes. Conformity and details are achieved by carrying out the actions and methods specified in the code.

Steel beams, or the combination of steel plates and wood components, do not have span tables (flitch beam). Steel plates and beams are typically used in construction, and their use needs the design and approval of a licensed engineer or architect.

Before making any modifications, check with your local building department to see if this is the case. Doing work that requires a permit without first getting one is a recipe for trouble, as most structural alteration methods will require one. 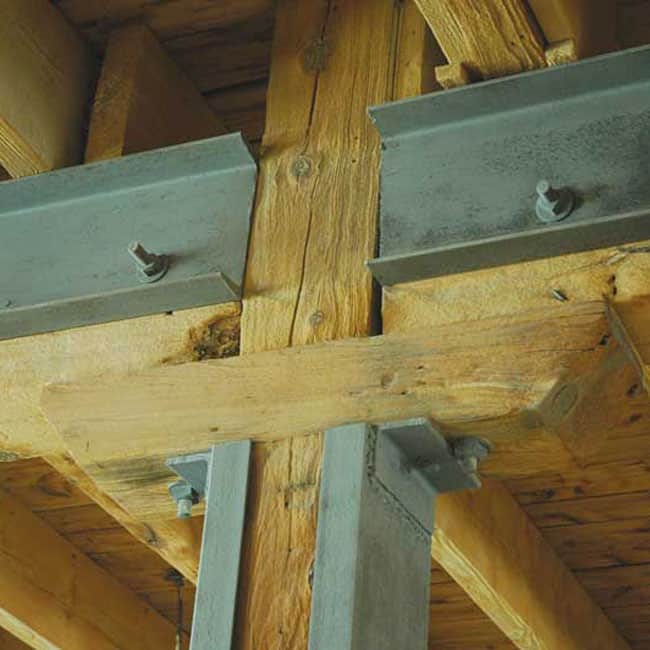 Installing a new support column where the beam sags most is the easiest and cheapest way to stabilize it and take the weight. New steel, wood, or masonry column is installed to bear the load by jacking up the weak beam. This reduces the structure’s beam span and beam stress and can be held in place with bolts or steel rods.

A new “sister” beam of the same size as the old one can be placed next to the weak beam to use the flitch plate method without using steel. The sagging beam is raised to its proper beam, and construction adhesive is applied to its exposed face.

A bolt is bolted every 16 inches along both beams, and the sister beam is forced against the glue. For additional load support, a sister beam can be set up on either side of the weakened one in the same manner as side plates. (Learn How Long Does It Take Tile To Set)

Steel bars and epoxy are another way of bracing a shaky wooden beam. However, this method necessitates being able to reach the beam’s top. The beam is slit along its length to create an inch-wide slot and about three-quarters of the way across its beam. After the cut has been filled with structural epoxy resin, reinforcing bars made of high-tensile steel are placed down, followed by additional epoxy and more bars.

Once the epoxy has cured, this method approximately doubles the beam’s strength.

What are Sistering Floor Joists?

Here’s more on sistering, a popular means to remedy a sinking floor joist by pairing it with another piece of same-sized lumber. This extra wood is then nailed or bolted to the sagging joist. “Sistering” a joist means pairing an old and new one.

There are several methods to sister a joist but using the same size and depth lumber is the most usual. Using plywood, OSB, metal flitch plates or side plates as a “sister” to an existing wood joist is common. (Read Attic Ladder Arm Bent Guide)

Sistering floor joists is an effective way to fix a broken one. However, you may have to remove a finished ceiling, wiring, plumbing, HVAC, or other utilities that pass through the issue joist.

Why Sister a Floor Joist?

All floor joists must bear 3″ on concrete and 1.5″ on wood per code. This includes sistered joists. You must use sistered joists if a perpendicular header is longer than 4′. This happens when steps prevent joists from running from wall to beam. A header attaches to joists on either side. These joists must be sistered and end in a wall or beam.

How to Sister Joists

Sistering the joist is a simple process, but it might be difficult if you remove several utilities or the joist doesn’t fit due to shrinkage. In these cases, a shorter, wider joist is chosen over a longer, narrower one. Sistering a joist:

This will be time-consuming as all wiring and plumbing, and you must remove HVAC. This usually means removing breaker box cables, piping from valves, and ductwork. For optimal subfloor stability and load-bearing function, the entire length is recommended to sistering the original joist.

If you’re keeping the sistered joist the same length as the old joist, your job is easy. Use the 2/3 rule when cutting a half joist. For example, if your joist is 12′, an 8′ sistered joist is sufficient. To properly support the old joist, place your new joist at least 3′ on either end of the point of deflection.

Screws are preferable to nails and bolts. Nails have better shear-holding power than screws, and joists face vertical shear stresses. 16d spirals are best for sistering. A 3.5″ 16d nail may secure two 1.5″ joists. Nail them off, bending them back into the wood, so the ends stick out the other side.

Alternate top, middle, and bottom every 6″. The sistered joist will look like a zig-zag of nails. Put 3 nails on each end of a partially sistered joist, top, middle, and bottom. If you use bolts instead of nails use 2 3″ lag bolts – one on top and one on the bottom – every 24″. You can also use 4″ carriage bolts. To prevent cracking or splitting, bolts should be 2″ from joist edges.

When nailing or bolting, apply construction adhesive
liberally. Fasteners are essential for this job, although glue will keep the spaces between them attached and improve the sistered joists’ connection. (Learn How To Paint Lacquer Furniture) 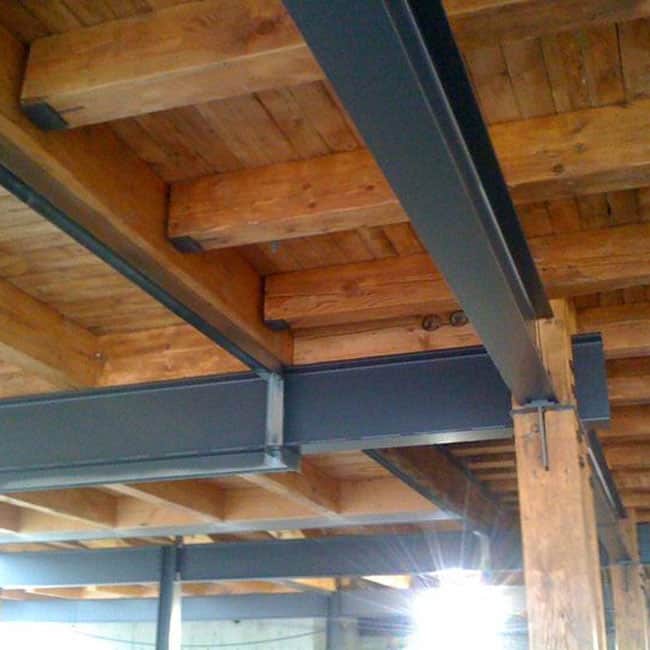 How to Reinforce Steel Beams

While wood needs support more often than steel plates and beams, you can find times this needs also doing. Here is a quick look at how you can increase the load bearing of weakened metal beams.

Steel beams are used in a wide variety of building projects. Steel beams vary by use. There are two ways to reinforce a beam, regardless of type or use.