Does Mulch Have Manure In It 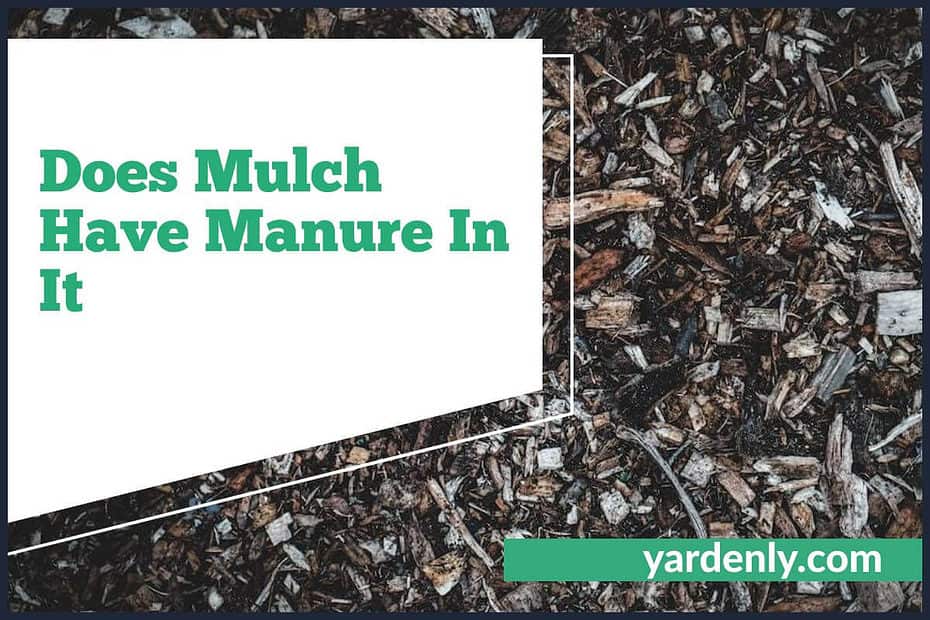 Mulch is one of the best garden additives any gardener can use. When it’s hot outside, they help retain soil moisture and add nutrients as the soil ages and decomposes. Another advantage is that natural mulch serves as a weed barrier and inhibits weed growth.

With different mulch, you may wonder why does mulch smell like manure sometimes? Mulching materials should never smell bad, and this can happen as the mulch you are using has already begun a state of decomposition.

In our guide, you can find out more about what causes the smell of rotten eggs and more. By the end, you’ll know the answer to how long does mulch smell for and is smelly mulch safe to use and still effective in the garden. (Read What Is Eating My Dahlia Leaves) 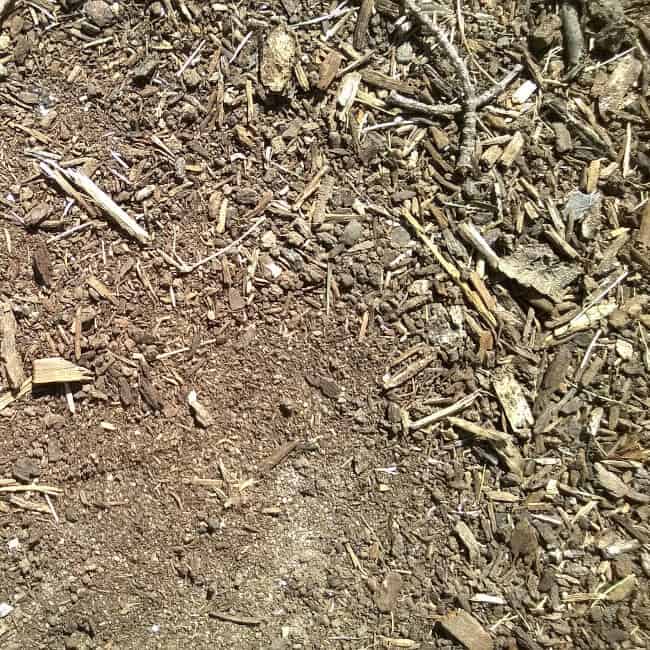 Although good mulch may have some odor, it is rarely strong or unpleasant. Instead, the distinct scent of freshly cut wood or organic matter, as you’d find in fresh compost, distinguishes healthy mulch.

It’s a great way to use your nose to judge the quality of mulch before using it on your plants; if it stinks, it’s probably not beneficial for them.

There are two explanations for why mulch smells like manure.

Organic mulch is produced on a large-scale commercial basis, and the way mulch is stored frequently contributes to the first reason it smells bad. Anaerobic decomposition is frequently caused by manufacturers storing mulch in heaps and sealing it inside plastic with no airflow.

Once sealed in airtight bags for sale, they continue to be kept in anaerobic conditions until you bring them home and remove them from the plastic. Because of the gases that gather and are trapped by the plastic, you can smell rotten eggs here as you release the mulch into your garden.

When you use organic mulch in your garden, decomposition takes place. The bacterial and fungal organisms in the soil give off a rotten smell, which is why mulch smells like manure. Actinomyces are the most common organisms that decompose mulch. Additionally, some chemicals will be released because of the breakdown, giving natural mulches their odor.

Plants receive a lot of nutrients, and the best natural mulch rarely smells too strongly. Using black rubber mulch or dyed mulch can explain why mulch smells bad. However, these mulches will smell for a variety of reasons.

Your soil might not benefit from rubber mulch or colored mulch. Even worse, summer heat from the black rubber mulch causes additional water evaporation.

Mulch doesn’t release strong odors; typically, healthy mulch only has an organic odor. However, if you use rough-cut woody mulch, it will smell like freshly chopped wood chips. A good sniff helps determine whether the mulch will be beneficial or harmful, as plants can suffer from toxins produced by anaerobic conditions.

Toxic mulch harms the foliage of your plants and causes yellow or scorch blotches on the leaves. This is because of the chemicals your plants absorb from the decaying old mulch.

There isn’t much you can do if you’re using black rubber mulch, which has chemicals. The advantage of using organic mulches is that excessive moisture and natural decomposition give them their pungent smell, yet even sour mulch eventually stops emitting bad smells. 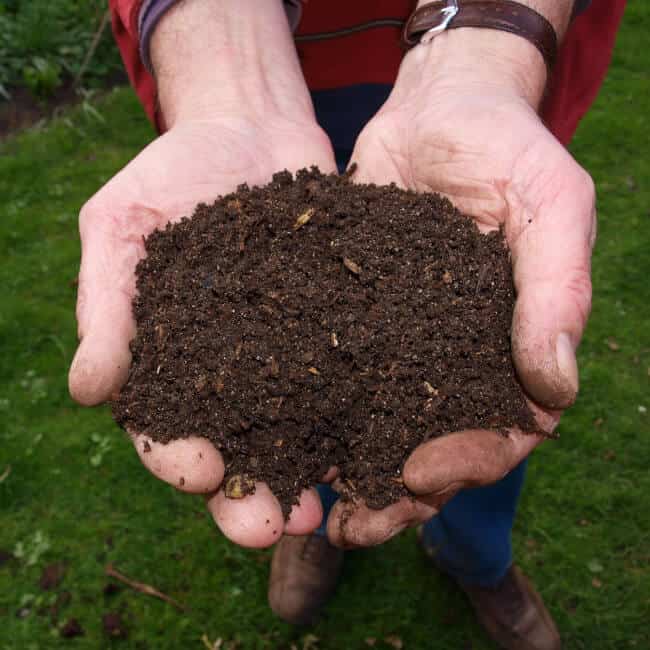 Your mulch probably smells like manure because of the anaerobic conditions there. As a result, a distinct sour or toxic odor may be audible. Commercial manure has a smell similar to that of cow manure. Typically, it is mass-produced and not appropriately stored when in large piles.

Instead, it can be stacked in significant heaps covered in plastic sheeting, which depletes the mulch inside oxygen. Most commercial mulch comes in airtight sacks. When these processes interact, the best conditions for anaerobic deterioration and the smell of manure are created.

When it breaks down under these anaerobic circumstances, it will produce acetic acid or hydrogen sulfide, leaving you with foul-smelling mulch.

That is the source of the sour mulch odor. Even worse, the decomposing mulch has an acidic pH. The pH level can quickly decrease from approximately 6.0 to about 2.0. The acidic mulch can quickly harm plants when combined with toxins like acetic acid and methanol. (Read Can You Spray Roundup On Wet Grass)

What Makes The Rotten Odor from Mulch Decomposition?

Mulch that smells like manure always has decomposition as the root cause. Mainly if you use organic mulch, this is true. Microbes like bacteria and fungi primarily bring on mulch decomposition. However, hydrogen sulfide and methane gas resulting from manure decomposition are the most dangerous.

It is heavier than air and will have a foul smell, bad to rotten eggs. After breathing this gas for a short while, your sense of smell becomes fatigued, and you may stop smelling the unpleasant smell.

The most frequent suspects are actinomyces, which thrive in anaerobic environments. They break down organic matter to produce humus, heat, water, and carbon dioxide.

It’s important to note that actinomyces are an essential part of the mulching process as they help aid a plant’s release of beneficial nutrients.

Why Does Mulch Smell So Bad?

The only solution is to replace the mulch with an organic mulch that smells better if the bad odors are caused by black mulch or dyed wood mulches.

If your organic mulch smells bad, it might contain too much moisture and emits an unpleasant smell. Instead, spread it out, expose it to the air, and the sun to dry it.

The good news is that many natural mulch options are available, and any of these could be the safest mulch for your garden. (Read What Temperature Is Too Hot To Water Grass)

Because it is beautiful and natural, pine straw can make great mulch. If there are many pine trees in your neighborhood, use this mulch because pine needles are difficult to wash or blow away.

In addition to preventing weed growth, grass clippings enrich the soil with nitrogen and potassium by keeping it moist.

If you bag your grass clippings and have a big lawn, you can build up grass mulch for nothing. Using grass cuttings can supplement the use of other fertilizers in your garden.

This mulch’s dark color is perfect for landscaping and it doesn’t wash away or blow away. The tiny pine bark mini nuggets keep the soil from drying out in warm weather.

The mulch works well for potted plants because it prevents water splashing on the soil and slowly breaks down and releases essential nutrients. 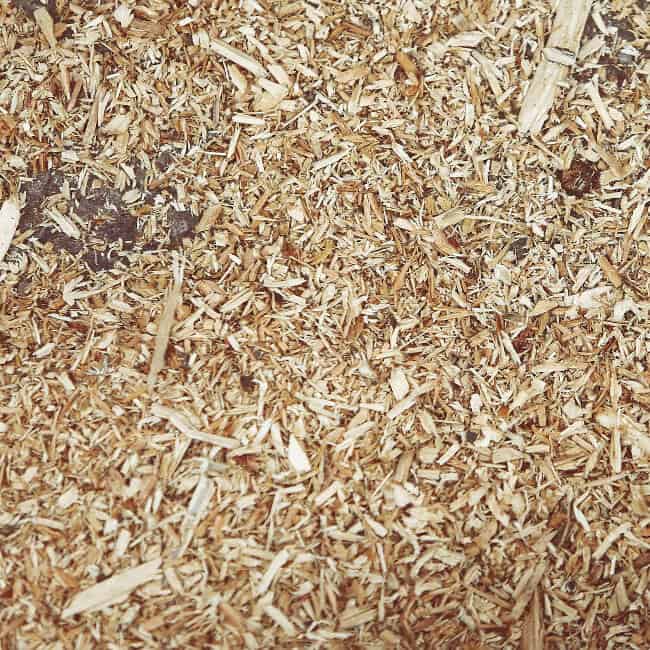 Despite the fact that many gardeners dislike using cypress mulch, it is organic and beneficial to plants, even though they cut trees for the purpose of making Cypress mulch.

Old mulch should be removed as it can lead to root rotting, and be harmful to your plants.

How To Stop You Mulch Smell?

New mulch’s manure smell lasts 3–14 days. As mulch dries and is exposed to oxygen, its odor disappears. Spread mulch so it’s no more than 3 inches thick to reduce odor.

Is the Smell of Mulch Dangerous?

Humans, animals, and plants are safe from the manure smell of mulch. Bacteria in your mulch release methane gas, but it’s not harmful. After spreading mulch, the manure smell will disappear. Bacteria will still break down organic mulch into garden fertilizer.

Spread sour mulch on a tarp to dry, then use it. Acidic mulch can harm plants by increasing soil acidity. Spread out sour mulch and let it dry, and once the manure smell goes and it smells like its organic ingredients, it’s ready for the garden bed. (Read Centipede Grass Vs Bermuda)

Besides anaerobic conditions, colored mulch can cause bad-smelling mulch. People buy colored mulch to make their gardens look better, and while colored mulches aren’t harmful to plants, they are smellier.

Red-dyed mulch uses red oxide or chromate copper arsenate, and once they get wet or hot, they can stink. 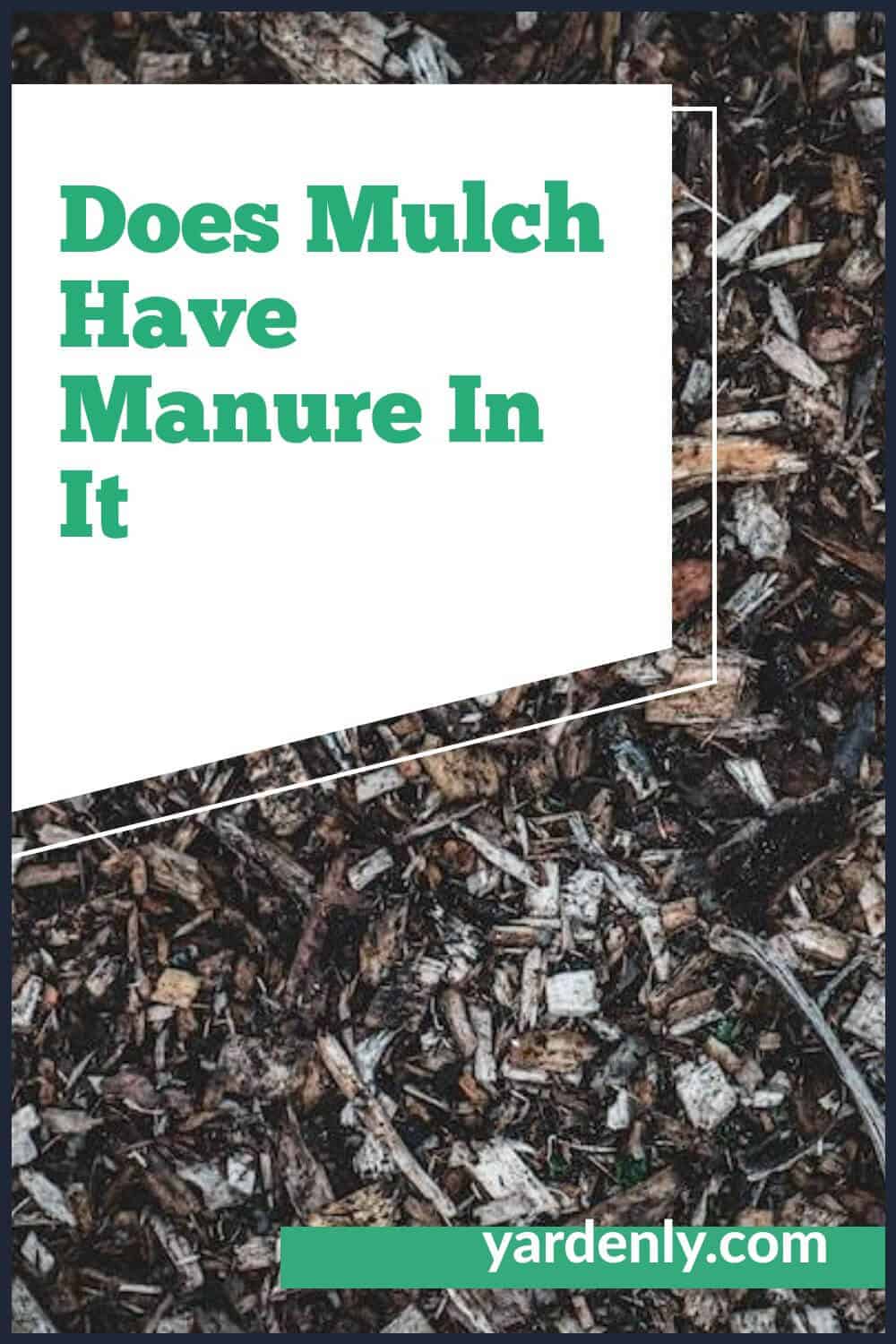