Orange Lily With Black Spots – All About Tiger Lillies

Flowers of the Oriental trumpet lily have deep pink petals and are borne on tall stems. The orange tiger lily is a common name for lilies, which leads to some confusion.

A real lily (Lilium lancifolium) with vivid orange petals mottled with dark-brown spots, mimicking a tiger’s coloring, is known as a tiger lily.

The petals are covered in deep brown speckles, and the large flowers are orange to reddish-orange. The orange tiger lily flower petals curl back, and the entire blossom droops downward.

Along the highways, you can spot orange daylily that looks remarkably similar, and many people call these lily flowers tiger lilies. However, it isn’t the plant named tiger lily correctly.

Ditch lilies are a less than complimentary names, such as orange roadside lilies you can often come across. In our guide, you can learn more about these American plants that catch everyone’s attention across the country, from their white to orange-spotted appearance.

What Are the Black Things On My Lilies?

These small black growths, known as bulbils, are aerial bulbs of perennials containing all the genetic information needed to start a new plant. Tiger lilies and numerous other hardy lilies produce them between the leaf and stem.

These bulbils fall to the ground in nature and eventually mature into flowering bulbs. When the plump black bulbils are easily plucked from the plant, you can harvest them.

Could you place them in a safe area of the garden? Just like peas, plant them in a furrow. You’ll get bulbs to plant in the garden or share with friends in a few years. (Read Does A Grapevine Have Leaves With Parallel Veins)

What Lily Has Orange and Black Petals?

A tiger lily is an orange lily with black dots found in many types of gardens that are either historic or now found in many modern homes.

Tiger lily (Lilium lancifolium or Lilium tigrinum) is an old-fashioned flower and one of the old but good flowers.

Tiger lilies grace the landscapes of many Americans and demand little care, and will thrive in a variety of garden locales. Tiger lilies are a real garden lily found in USDA plant hardiness zones 4 through 8.

It is the orange tint and black markings you see on tiger lilies, from where they get their name. The Tiger lilies reach 3 to 6 feet in maturity, grow from a scaled bulb, and produce a single stem.

Lance-shaped leaves grow 5 to 8 inches long and are strewn along the stem’s unbranched length. Up to a dozen unscented orange lilies with black-spotted recurved petals are produced by terminal flower buds.

From the bottom to the top, flower buds mature and open in order. In midsummer, well-placed bulbs grow clumps that offer an eye-catching bouquet of blooms. 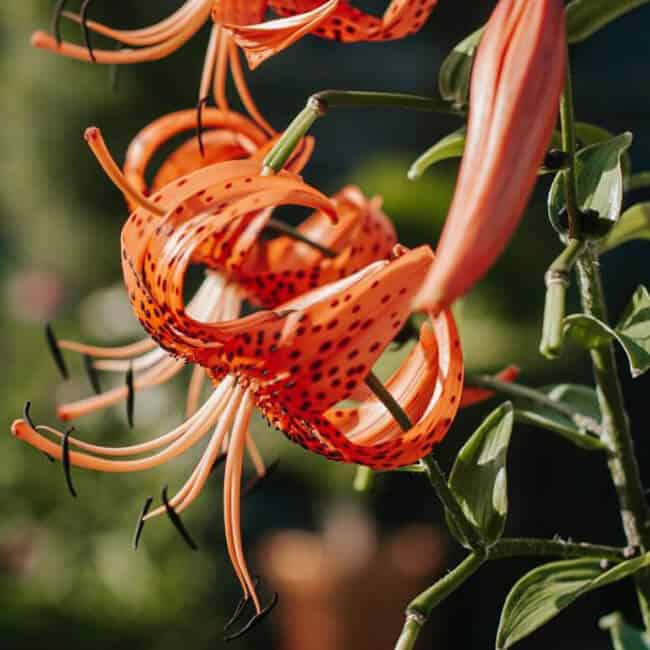 Because this plant reproduces in several ways, one thriving orange tiger lily can quickly create a great display of tiger lilies.

Tiger lilies are grown in moist, well-drained soil with a pH range of acidic to neutral. Tiger lilies prefer the sun, yet they can also thrive in partial shade. The best planting location provides cover for the roots while allowing the stalks to get early or late afternoon sun.

For your tiger lily bulb, dig a 12-inch-deep trench, and replace some of the soil with leaf mold or other organic matter into your planting spot. Plant your tiger lily bulb 2 1/2 times its diameter deep into the ground. (Learn How To Propagate Virginia Creeper)

Bulbs need to be spaced six to twelve inches apart, and if you plant a tiger lily bulb too shallow, the contractile roots pull it further into the earth, resulting in the optimum planting depth.

What Do You Do With Tiger Lily Bulbs?

New plant owners frequently inquire about when they should transplant their orange flowers with black spots (Orange Tiger Lily).

The spotted lily flower is a summer-blooming perennial bulb with flowers that can be white, yellow, or red but are most commonly deep orange with beautiful, speckled petals. Plants reach heights of 4 feet, and the number of blooms rises over time. 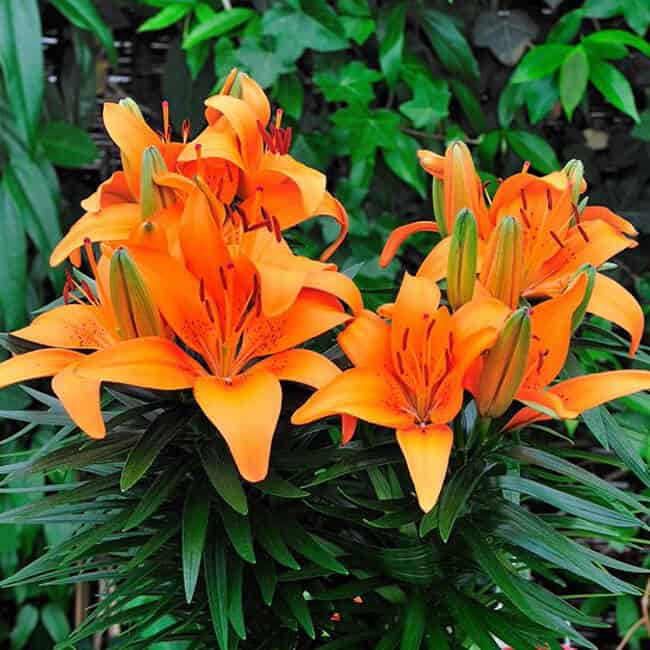 What Are Those Orange Lilies Called?

Flowers’ common names are attractive and colorful features for any keen gardener. However, they can be confusing. The dog’s tooth violet could be one gardener’s trout lily while not for another. You can discover when gardening that understanding the Latin or botanical name is necessary.

One instance being when you want to know the difference between real lilies (Lilium) and daylilies (Hemerocallis).

Liliums are often referred to as lilies, while many refer to daylilies as lilies as well.

Typically, this doesn’t matter until you want a specific plant and researching how to grow such a plant. Fortunately, the leaves, stalk, and growth patterns of the two types of plants here make it straightforward to identify between them.

Leaves are an easy giveaway for the plant you have. Long, flat strap-shaped blades grow in a group from the plant’s crown to the soil line are daylilies. Daylilies also grow up to four feet.

Hybridizers love daylilies, and there are over 30,000 kinds to choose from. Daylilies don’t make nice cut flowers since the flower blooms for a single day.

Hemerocallis comes from the Greek words “Hemera” and “kallos,” which mean “day” and “beautiful.” The flowers are held on thin stalks called scapes, which grow from the plant’s central base, and each of the scapes can have several branches.

To keep older varieties kinds in bloom, they needed to be dead-headed every day, while newer hybrids can self-deadhead. Either way, most plants have several buds that bloom over time.

On examination, you can see six petals arranged into two tiers of three on the flower, and the genuine petals are the top three, where sepals make up the lowest three petals.

The neck, or core of the flower, is frequently a distinct color. Six or seven stamens and a two-lobed anther can be seen in each flower. Varieties of the flowers include round, spider-shaped, triangular, star-shaped, double, and ruffled.

True lilies are formed with overlapping scales on the bulb, and you’ll discover about 100 species of lilies classed as Asiatic, Oriental, or Martagon (Turk’s cap).

A single unbranched central stem grows from the lily bulb, and flower buds grow at the top. Leaves grow in whorls or spirals and cover the entire length of the stem. Such lilies grow to one and a half feet up to ten feet.

Lilies have six petals and six anthers, and each bloom can last up to a week, thus making true lilies among the most popular cut flowers. The lowest buds on the stem open first, followed by other buds and the top buds. Lilies occur in various forms and sizes, including trumpet, bowl, funnel, and recurved flowers. 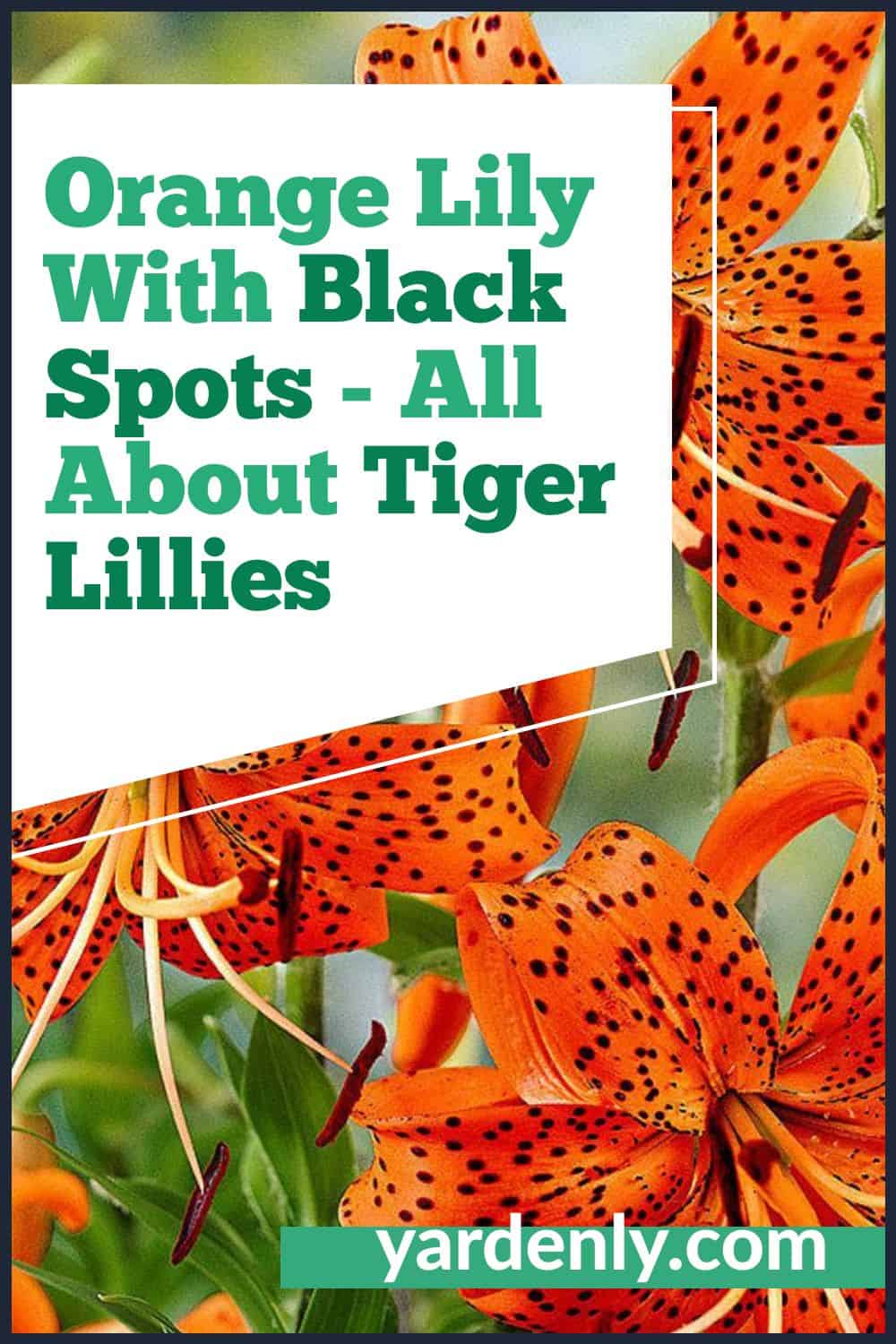