When your home has old plumbing or drainage, you’ll often have a cast iron sewer pipe, cast iron plumbing stacks, or other pipes you need to remove. Most old cast iron drain pipes and cast-iron plumbing are sealed using lead and oakum.

Oakum, a tar-coated hemp material placed into the joint to seal it, where the oakum swells and thus seals the joint. The oakum is held in place, and the pipe joint is strengthened by casting a 1′′ thick bead of lead around the pipe inside the hub/socket.

Fortunately, both the lead and the oakum can be removed if you need to preserve one side of the pipe. However, when you wish to install a new bathroom, it takes some skill and effort to separate an old pipe because if you use too much force, you could break the side of the drain line you want to remain in position. (Learn How Hot Does A Chimney Flue Get)

In our guide, to help you know about replacing 2 cast iron plumbing stack and other oakum-filled pipes, we show you all the way and means you need.

By the end, you’ll know all you need to smash the pipe with a hammer if you don’t need the pipe or how to remove cast iron drain pipe and other pipes for your new connection. 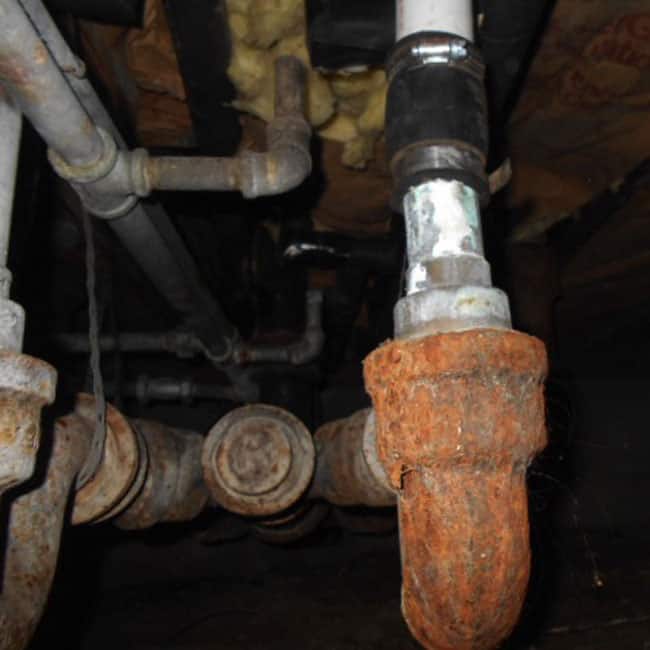 How Do You Take Apart Cast-Iron Pipe Fittings?

The question most often asked is how to repair a cast iron pipe joint? Here are the steps needed to remove one piece of pipe while protecting the other side.

Depending on the replacement, you may have to dispose of cast-iron pipes with fittings
and couplers, so you need to know how to remove cast iron pipe safely.

You can save money on transport by disassembling the pipes and separating them into manageable sections.

The method requires a cast-iron snap cutter and a few hand tools.

If you need to repair a joint and don’t need to remove part of the main drain.

Remove any corrosion from the lead joint if you have a leak or can smell a foul odor.

Tap the old molten lead back into the cast pipe joint using a cold chisel and hammer. Next, you need to fill the joint using cast-iron pipe repair paste.

If you spot any holes, fill these around the joint of your cast iron drain.

Note: a reciprocating saw is the best tool for cutting cast-iron pipes in the ground or under a concrete slab. (Read Running Pipes In Stud Walls)

When making a cast iron repair on your drain pipe, you may need to locate and cut out any damaged cast-iron pipe and replace it with a new PVC pipe.

With such a cast-iron repair, you need all your parts beforehand, as you can’t cut cast-iron pipe and leave it open as you visit the hardware store.

What is Cast Iron Soil Pipe?

In an older US house built before the 1980s, it’s typical to find black metal pipes under floors, walls, and roofs. This cast iron pipe was used to create plumbing drain systems for years.

Cast iron was also used in yards and under concrete floors, which can also fail. Repairing or replacing cast iron in the ground or under concrete requires uncovering it, then replacing the soil and concrete.

Before cutting any cast-iron pipe, you need to decide if you’ll replace the entire thing or just one or two sections and replace damaged materials. 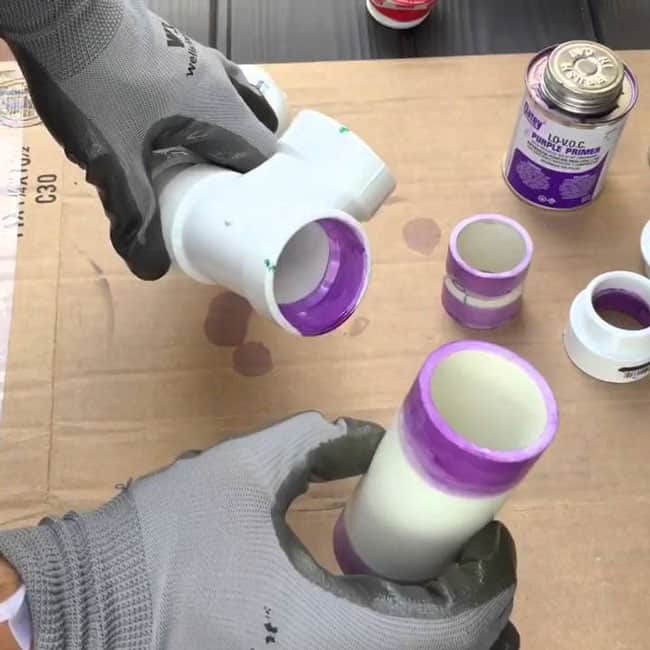 How to Join PVC Pipes and Fittings

You can use a rubber coupling to join cast iron to a PVC section, and you’ll need PVC glue to glue the PVC pieces together.

Because a good fit between pipes and fittings is essential, you need to cut your sections of the pipe clean and straight.

How Do You Remove Cast-Iron Pipe Lead Joint?

Here you can find the steps to remove cast-iron plumbing. 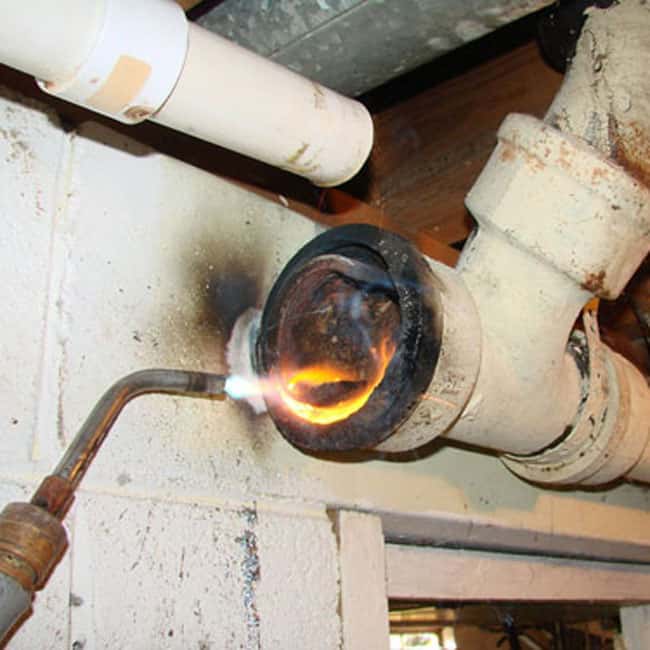 How Do You Remove Old Lead And Oakum Joints?

Here’s how to remove melted lead and oakum joints in your CI pipe?

Such a task is challenging in your home and for the everyday handyman who lacks accessibility to tools and working area. (Learn How To Get Rid Of Rats Under Concrete Slab)

Here’s how to replace the cast iron pipe or sewer line fittings with plastic ones.

Two methods for physically removing lead are drilling lead every 1/4′′ or so to separate it and then to chip off each piece with a 1/2′′ or 1/4′′ chisel.

If you want to re-use the main pipe rather than replace the drain, it will take a long time and a lot of patience and effort.

If you don’t have complete access to the joint between joists or studs, you’ll need to use a right-angle drill.

How Are Cast-Iron Pipes Joined?

Oakum is a tar-coated hemp substance used to seal the joint. When oakum is moist, it swells to the maximum point and seals the joint and every small hole between the fittings.

The oakum is held in place, and the pipe joint is strengthened by a 1′′ thick bead of lead they cast around the pipe inside the hub/socket. (Learn How To Fix A Squeaky Refrigerator Door)

In many home remodels and retrofit projects, contractors are replacing old cast-iron pipes and vent risers with ABS plastic pipes. 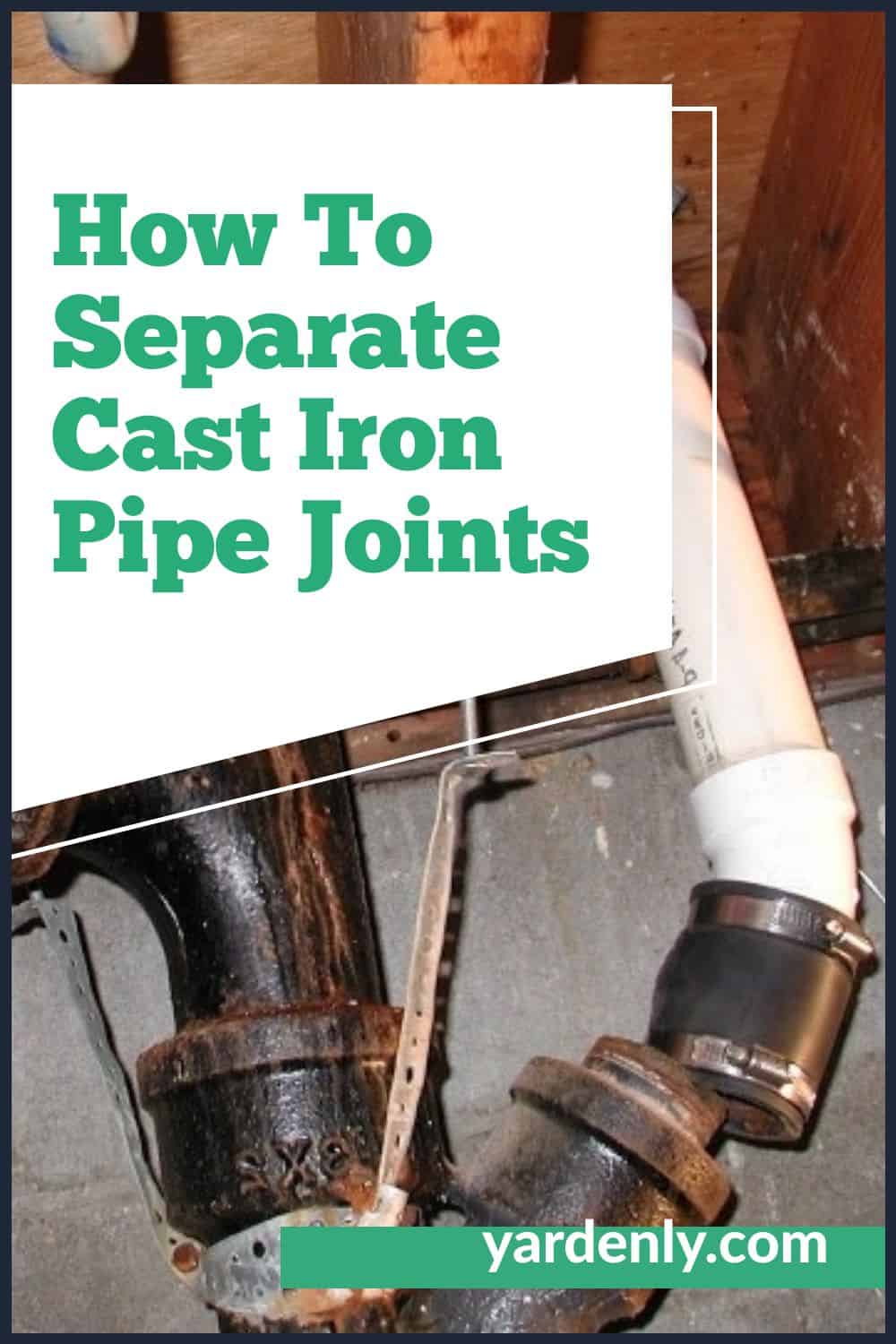